Animals Killed During Crop Production: Not As Many As You Think

A discussion came up on Facebook recently about the death of small animals, or rodents, during crop production, and how this is a blow against veganism due to its strictly compassionate doctrine (i.e. that by harvesting crops for consumption, animal exploitation is occurring). There are several assumptions being made in that argument, and after some research, I think it falls flat. To clarify, the argument would be something like:

If the doctrine of eating, and living in general, is to maximize the well-being, or decrease the suffering, of the largest number of conscious (or sentient) creatures, then utilizing a model where grains are not harvested and rodents killed, in conjunction with other parameters*, is the most beneficial for all creatures.

*What are these “other parameters?” First, you would need a “lowest-cruelty” food source. Considering that almost all animals raised for food are either exclusively or partially given grains (corn, soy, wheat), a completely grass-fed model would have to be put in place to not use grains for feed, and therefore falling back into the anti-grain argument. This is ultra-rare in the United States, so from a large-scale perspective – which is what we are addressing when looking at mass consumption of common plant-based (vegan) grains like wheat and soy – animals will not be strictly grass fed.

Two other things to consider are that: 1) it is confusing for meat-eaters to make this argument, as most of them by default are not concerned with the well-being of conscious creatures (i.e. they believe is morally acceptable to kill animals for food), and 2) would a high-meat and low-grain diet actually be more compassionate, i.e. resulting in a lower overall number of animals deaths?

The data is astounding: to produce one million calories, approximately 1.65 animals are killed.

According to the research done by Mark Middelton on AnimalVisuals, the answer is no. In his piece “Number of Animals Killed to Produce One Million Calories in Eight Food Categories,” (see infographic above) he references 15 different scholarly articles to conclude that while some animals may be killed during crop production, compared with how many are needed to produce an equivalent number of raw food calories, the compassionate choice is grain, not meat.

The data is astounding: to produce one million calories, approximately 1.65 animals are killed. This figure is based on a few assumptions as well, namely that “a constant estimate of number of animals killed per hectare of annual crops per year [is] 15 animals” and that 0.27 acres of grain can yield one million food calories (based on a Cornell study, #15, cited in his article). When I e-mailed Middleton about this figure, as it seemed so shocking, he replied:

It doesn’t really matter what this number turns out to actually be, I think the point is that more animals will be killed in harvesting to produce meat calories than to produce the same number of grain calories, because you have to grow much more grain to feed to the animals being raised.

So, I think two things emerge: more research in multiple geographic locations needs to be done on the number of animals being killed in crop production (as well as how to minimize or eliminate that “collateral damage”), and that a vegan diet, compared to one using meat or dairy, will result in less animal suffering and death.

Now, if ethically you are not concerned with the well-being of conscious creatures, preserving sentience, etc. then this will do little to sway you. The problems with Speciesism are very real (see “Breast Milk Dairy…“), but that’s an inquiry for another time. What I believe is that the data presented here should put to rest the argument that veganism is somehow flawed due to animals killed during the crop production for grains that vegans eat. 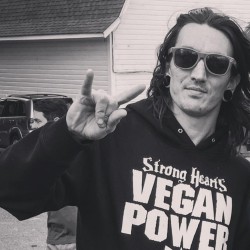 Sam
Samuel has been vegan for nearly a decade and after learning about the health effects of the standard American meat-and-dairy diet. He became interested in animal rights and environmental ethics shortly thereafter and is passionate about fighting speciesism on many levels. He currently lives in Ohio and enjoys weightlifting, cooking, philosophy, black metal, and discovering every vegan restaurant in the world.

Latest posts by Sam (see all)