I’ll start with saying what this blog is not:
This isn’t an attempt to capitalize on the growing “vegan” trend.  The end goal is not to develop a readership in order to market or monetize.  This is not yet another blog meant to post recipes, to talk about my vegan journey, or to post vegan memes.  There is already an overabundance of sites like those.  The last thing the growing vegan community needs is another blog of recipes, diet plans, or anything reinforcing the (false) concept that veganism is about food rather than an adopted world-view.

So what is missing? Sites that encourage critical thinking within the vegan community. Sites that act as a check on the increasing amount of misinformation floating around, as well as the growing the influence of confirmation bias.  Discussions about veganism as a rational life choice, rather than as either a diet, or focused purely on emotion and passion, instead of critical thinking.

Which brings me to the reason for the rational vegan: I wholeheartedly believe that veganism, along with being rooted in compassion and empathy,  is a rational choice .  Veganism makes sense for a number of quantifiable reasons, with supporting evidence.


If we wish to promote a more ethical and compassionate way of living to the rest of the world, then it is in our own best interests to ensure that the vegan message is one that can be supported with both appeals to emotion and intellect.
I don’t mean to imply that the passion, or the emotional side of veganism is unimportant, those aspects are very important.  But it is necessary to have some checks and balances in the ideology, especially now that it is increasingly being presented to a greater audience and is experiencing rapid growth in popular culture.

There is quite a bit of what I can only call “vegan mythology” circulating out there that is being presented as fact (statements like “Veganism cures cancer“).  There is also growing a confluence and confusion of the vegan ethic with other concepts that have no commonality, as well as a basic misunderstanding of what veganism is – in both the media and the public at large. Unfortunately this last bit even includes many individuals who (sometimes mistakenly) self-identify as “vegan.”

The bottom line is this:  If we wish to promote a more ethical and compassionate way of living to the rest of the world, then it is in our own best interests to ensure that the vegan message is one that can be supported with both appeals to emotion and intellect. We need to hold ourselves to a both a high intellectual and ethical standard. If we do not, someone else will, which will in turn give the impression that veganism is either irrational, or is rife with inconsistencies. It is up to us to counter and challenge the widespread misinformation about what veganism actually is, and what it means to live vegan.

So this is where I would like to invite others into the conversation about veganism, as a life choice, and issues related to veganism, either intimately or tangentally.  I plan on tackling a lot of issues coming up, including, but not limited to:

Comments and civil discussion are welcome. Keep an eye out for new posts in the near future, and hopefully other contributors adding their own voice. If you would like to contribute, send a message via the contact page. 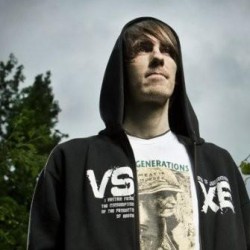 Kurt Austin
As a long-term vegan, Kurt has been involved with animal activism for well over a decade. He is the founder of Catalyst Records, a label dedicated in-part to raisingawareness about the exploitation of non-human animals and has performed in numerous bands that centered around the vegan ethic. He is currently a web developer and graphic designer based in Indianapolis, Indiana.